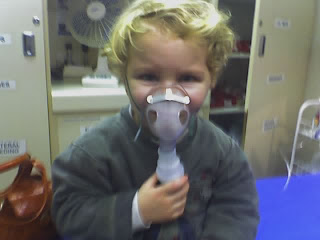 If you have been wondering why I have been so scarce it is because we have been. Our little Poepie and i spent the night in Vincent Palotti Hospital on Monday night. He was having such problems breathing and coughing non-stop that we realised he needed help and headed to the hospital, hoping we could still catch his Ped., Paul Sinclair. Gratefully he was still there and booked Maxi in straight away putting him onto a nebeuliser. Maxi, as scared as he was, let us 'mask' him and within 20min he had his pink cheeks back again and was tearing around the Willow Ward causing havoc.

The night in the hospital I seriously don't want to repeat in a hurry. Maxi was awake until 12am asking "what's that noise?" every time there was a strange sound....and believe me there were plenty. The mama couldn't sleep.......Lazy Boys....."so comfie, just like a good-night's sleep" the ad says. LIE's, I say, all LIE's. My blue, upholstered piece of nastiness was determined to send me into a physio's office, even before I arrived. Horrible thing that chair was!!!! I was quite relieved when the nurse came at 2am to give Max his next giant syringe of medication and another nebuliser. "Don't worry, 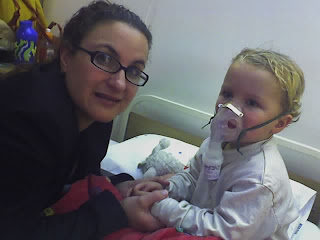 he won't wake up, he will just sleep right through", she said. HA!!! that's what she thought. The little guy nearly had a heart attack and surfaced waving his arms around wildly fighting off whatever it was that woke him up. The old nurse holding the mask nearly lost her false teeth she got such a fright. Mama to the rescue and he sat quietly until it did its thing. He has bravely nicknamed his nebuliser, "His Pilot mask". 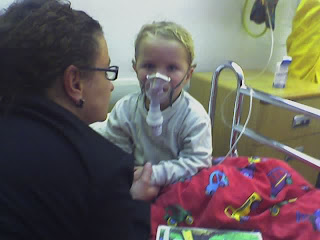 Maxi proceeded over the next couple of hours to win the hearts of all the nurses on duty, by running to the side of any crying child and concernedly asking what was wrong with the baby.......suggesting hugs will make them feel better and saying "thanks nurse, thanks" every time they did anything for him. All in all he got about three hours sleep...and the mama none, so at 8am when the Ped. came to see Maxi and commented that "the Mama wasn't looking her best", I was ready to drop-kick him (the doctor that is) to timbucktoo.

Three hours later, discharged, laden with med's and heading homeward. I was a tired but thankful mama.

Thank you to all those out there who sent up prayers on Maxi's behalf. You are fabulous!!!

Being in that hospital talking with other moms, made me realise how privileged we are to live the life we do, with our generally very good health. Guys don't take your good health for granted, things could be different in a blink.