From the mouth of babes. 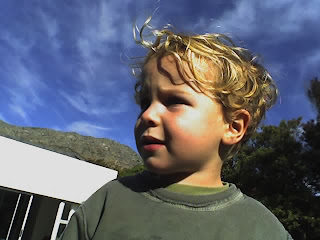 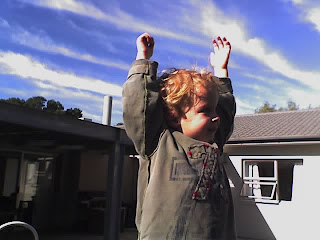 Oh yeah, those words came out of Maxi's mouth this am. We were jumping on the trampoline when suddenly he stopped, turned to me with his arms in the air and sprouted those little words of wisdom. As I have said on many an occasion....he is 3 going on old man! I am convinced he must have heard them somewhere because I can't believe for a second he just came up with that little line all on his own.
The plot thickens....I will keep you in the loop, with the search for the owner of that little gem.

To change the subject...I am so blown away by the quality of pic's from my Motorola...it stopped maxi mid flight on the trampoline >>>>>>>> 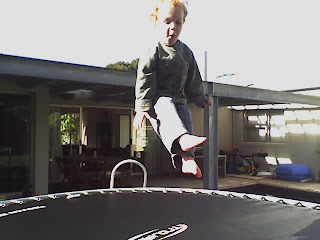 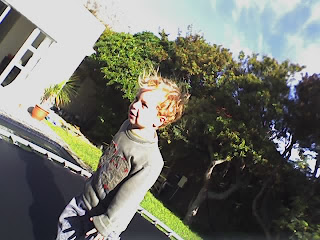 Well enough of that, I suppose an explanation for my absence is in order....
I was busy, {busy doing WHAT you are probably thinking...you Watson's never do anything} true, true but I have been...I've been busy scrapping.
Pencillines a site I visit quite often for inspiration, had a DT call this weekend and I thought I'd give it a bash {1st time you know that I have plucked up the courage to do something like this}. They gave us a sketch and we had to do a L.O based on it. So that's what I've been up too {Stevie I can almost hear your voice saying:"BORING!", well for some of us with kids is doesn't take very much to entertain us hahaha!}, along with a couple of other L.O's too. I haven't scrapped for about a month, a whole month....for a hooked scrapper that is an age...a life time...such a long time that cracks begin to show and the stuffing pops out. Yeah it does...ask Tersh, he can verify the ugly truth.

While I was doing this, where was Maxi you might be thinking? He is such a self starter {thank the Lord} that he was doing what he does best. Playing the fool, watching a DVD or 3, harassing his poor defenseless dad. His latest favorite, is the Barnyard. Not the best storyline or animation for that matter but to a 3yr old obsessed with music it was a hit....barn dancing cows, drumming pigs, shaggy dog electric guitarists, kitty vocalists. Loads of fun. 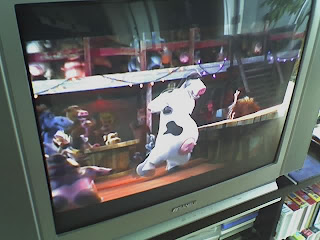 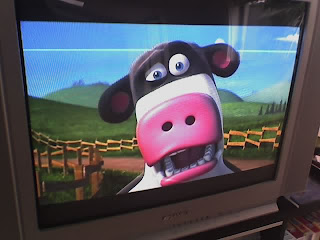 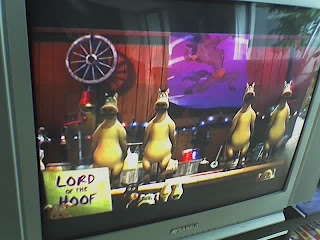 This weekend was the end to that "nebuliza" as Maxi calls it. He did however get over his initial hysteria after seeing a book at the library on firemen. The one picture in particular was a group of firefighters emerging from a flame engulfed building, smoke billowing around them....all wearing "MASKS". Maxi was ecstatic, hence the get-up >>>>>> 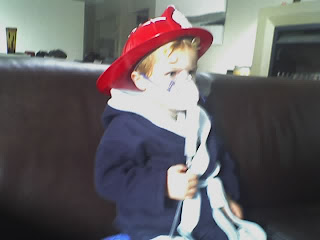 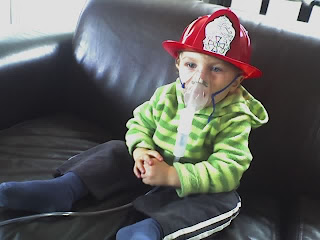 Well I am knackered to put it mildly, especially as it is now 11.38pm. Freek!!! I gotta go sleep. I will hopefully get a gap tomorrow to post some of my new L.O's.