Contrary to what you think, I think, of my crazy life, sometimes it actually isn't half bad. There are good times mixed in with a few bad times........but sometimes there comes along one of 'those' moments. The sort of moments that touch a funny bone somewhere and get the laugh juices running.
We had one of those moments the other evening.
Maxi was getting ready to go to bed and he had just finished on the loo. He is at that real independent stage in his 3yr old life, where I am faced with:

every time something needs to be done. So he had just finished in the bathroom and came staggering into the bedroom, walking and pulling at his underpants & PJ's in one movement trying to get dressed. He was getting MIGHTY frustrated because the x2 articles of clothing had somehow tangled into a large knot under his bottom and just wasn't budging. With one last mighty heave he finally got them up. The force with which he heave-hoed, got his pants well and truly up, so far up in fact, that they ended way up under his armpits {shhhhh... I do admit the thrifty Mama had him is PJ's x2 sizes too big}.

(Luigi~get it... from the movie Car's???)....and for those un-enlightened let me explain. He was talking about his butt wedgie in 3yr old code but got his words a bit mixed up. Tersh & I were rolling on the floor laughing....it was one of 'those' moments that might seem like "ya, so what???" to some, but for us it was hysterical. We laughed and laughed....thankfully while the normally trigger happy Mama was recovering on the floor, T was on the ball and got some pic's using his cell phone>>>>>> 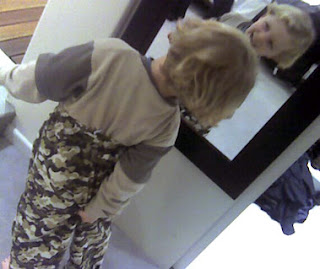 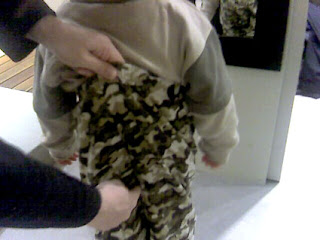 Talking about moments....maybe not a funny as the {Butt-luigi hahaha!} but a 'moment' anyhow for us worth mentioning.

........we went out as a family..... for breakfast.....to a restaurant
......it's true we did!!!! My lovely hubbie folded and agreed to try it but on one condition, that at the smallest hint of drama with Max, we would pack up and come home. My darling husband, whom I love very much, is plagued with a syndrome that I hear many other men struggle with too.........."One-thing-at-a-time Syndrome", so Max and breakfast at restaurant, constituted 2 things, hence we almost never do it. Well I am pleased to report that all went well, Max had fun, the restaurant is still standing and the Mama & Dad got to eat eggs (albeit a bit cold from x3 toilet trips) but eaten nether the less. 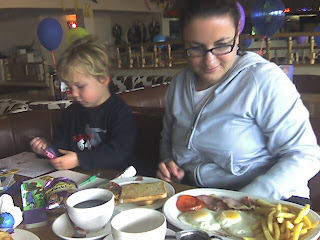 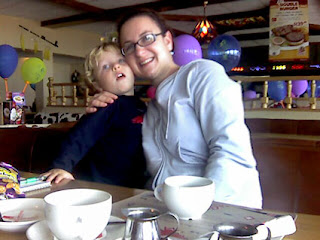 A laugh lifestyle is predicated upon our attitude toward the
daily stuff of life. When those tasks seem too dull to endure,
figure out a way to make them fun; get creative and entertain
yourself. If the stuff of life for you right now is not dull and boring
but instead painful and overwhelming, find something in the midst
of the pain that makes you smile or giggle anyway. There's always
something somewhere. . . even if you have to just
pretend to laugh until you really do!

I thought this quote was good advice, don't you? We tried it this weekend and do you know what, it works!!

Have a FUNtastic day!!