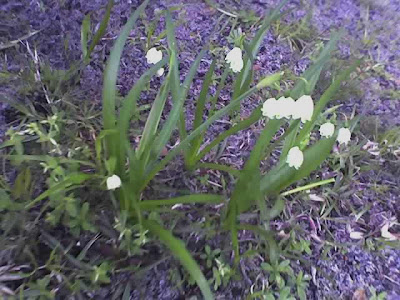 Apparently Spring has sprung!!! ......and the weary Mama & Dad sigh in horror!! How do they know it is spring, I ask? Yes, the days are slightly longer but not that the kids would know, surely????? Are the birdies singing earlier or are there more of them singing??? I dunno....but the rug-rats have decided that 6.30am {on weekends too}, is now the time to surface and start the day. 6.30 you might be wondering is not so bad???? but for the parents who's usual bedtime is around 11-11.30pm....6.30am is REAL early and OK our usual wake-up time is 7.15am, so what's the big deal about 45minutes ???? A lot I'll have you know, it makes the difference between border- line GRUMPY to fully-blown GRUMPY!!!!!!!! {hahahahaha}

Anyway the pictures say it all~ Bearing in mind it is 6.45am in the morning.....please note the gross lack of enthusiasm from the father.....those drag lines on the tarmac are for real......from the tread on his slippers. The mama is MIA in spirit but in body the index finger was still able to depress the shutter button and take {albeit BAD!} photographic evidence of the mornings proceedings. 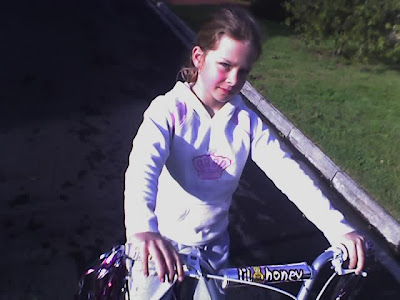 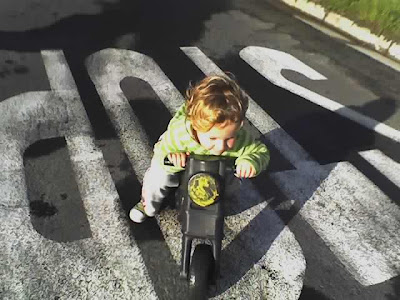 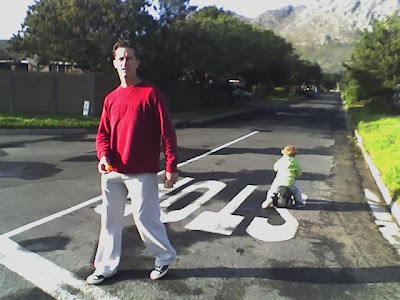 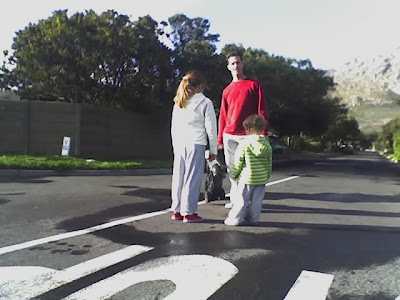 The above right hand picture, was the family's gross fascination with a squished leopard toad. What is it with those damn toads? The are almost extinct but they insist on crawling onto the road, in front of moving vehicles?? With the amount of carcasses on the roads around our neighborhood, they won't last until this time next year? 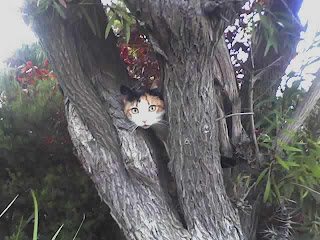 The highlight of the excursion was the kitty friends the kids found along the way.......this one was Chloe. She was a hunni and stuck around for ages, until the mini terrorist decided to step up the pace of the games a bit and added a leafy branch to the mix. The cat didn't stick around for very long after that.....I think it was the mistaken WACKS in the face from an over enthusiastic pre-schooler that finally did it. 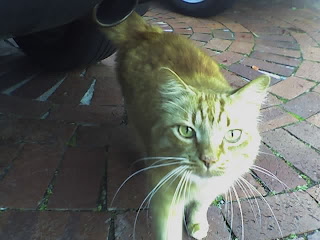 This ginger one was a bit wiser. He knew exactly what he was dealing with from the second he laid eyes on Max. He kept one step ahead of Max the whole time and of course Max loved this and thought it was all part of the game. If only he knew....hhahahaha! the cat was actually thinking up creative ways to out manoeuvre the yellow haired kid! And he did, Maxi didn't even get to stroke him. 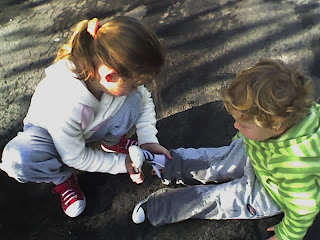 Puddle jumping was a huge hit, until the filthy road water soaked through the shoes, socks and x2 pair of pants.

**Big sister to the rescue.

This was after Maxi matter-of-factly asked Cas: "I need help Cas, there is water in my shoes. They must come off!!!". Cass then replied: "Maxi you can't take your shoes off, it is still a long way to walk home". Max promptly replied saying: "No silly, I only want to take the water out, then I will put the shoes back on again".

The logic of a three year old boggles the mind!!!!!

Well folks as you can see fun was definitely had by all the under 9's in the outfit. The over 35's on the other hand are having trouble adjusting to the early starting times....hopefully the renewed love of early mornings will kick in soon.......'cos it is SPRING after all and thats a good thing isn't it!!!!