Geepers it is the most UNBELIEVABLE day.....there is no wind and it is at least 30 degrees C outside. Definitely going to be an evening for the beach, once Tersh has finished in the office. Nice thing about having your own business from home, is that you can knock off a bit earlier on the odd occasion without having a grumpy boss breathing down your neck. Yesterday was a gem of an arvi too, we went to the play park down the road where Maxi & Tersh had a ball on the new blue jungle-gym they have just put in. The game was steered by Maxi....he was Kipper the dog & T was Tiger {his Scottish terrier friend}....& they were hiding in their igloo from the snow storm outside. The joy of the imaginative mind at work, with a bit of help from Hollyweird. Snow in Africa....go figure? 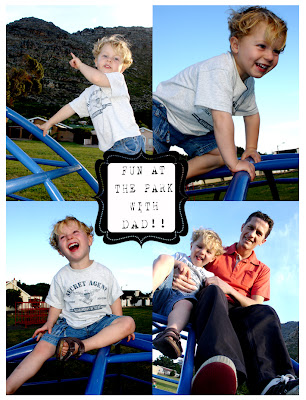 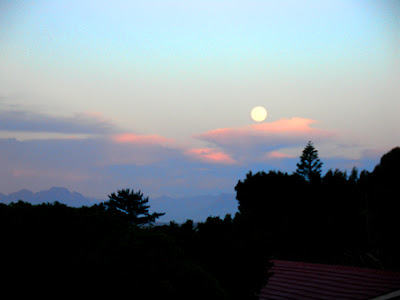 The moon rise was out of this world....I managed to capture it on film....even if a bit far away {I only had my small Sony point and shoot with me}. The colours were straight out of God's paint box. Maxi was standing at the top of the tall slide when be noticed it on the horizon.

"Mum & Dad....look at the beautiful moon! {his favourite adjective at the moment} . It is all white & blue.....and a circle"...... definitely a mini Einstein in the making. {Every mothers wishful thinking I think LOL! }

Fresh air on the lungs & a romp in the park does wonders for the cabin fever for the big people & helps get the child really pooped, resulting in little or no guilt pangs being felt by the parents for the pronto-to-bed routine, as soon as we got home. I mean what is a date night with your bloke without another couple of episodes of LOST! Thank the Lord for Vee's videos.....series 3 has just arrived. We are on disc no. 2 & will have no. 3 under our belts before mid-night tonight.

DARMA we'd be LOST without you!!!

Have a good weekend everyone. "May the force be with you!"