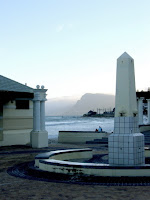 Oh yeah! it is definitely back! And I thought we still had a couple of those beautiful windless spring 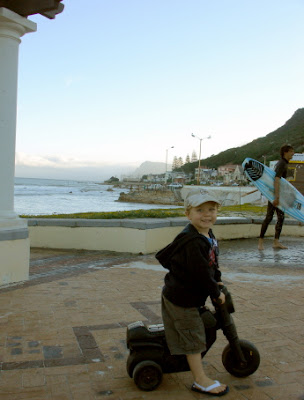 evenings ahead of us.......I was wrong. Summer is obviously itching to get here, although the temperature sure isn't saying that.

We braved the chilly wind {50knots in places} and headed to Muizenberg beach, to allow Maxi let of steam and get rid of any last bit of energy he had in his "batteries" by riding his motorbike, before we headed home to start the bedtime 'run'. The thought was that we could have a leisurely stroll, while he zoomed around. Ha! the little guy had other plans....he found any available ramp he could, to ride down at @ least 100 km/h and the closer he got to our legs the better......BOYS!!! {too darn cute but damage is guaranteed I think thats what the instructions said}. So, so much for leisurely.

There was this one ramp that was at least 6m long, leading up to the second story of the pavilion......@ first Max was a bit nervous to come down too fast & used his feet as brakes to slow his descent but by try no.3 he was using his legs to scoot even faster than just free wheeling. The mama standing at the bottom, watching this lot happen before my eyes, felt moved to opt for the shut eye approach & I went into the La-la Land of denial that I was even standing where I was! I was trying very hard to picture myself lying on a tranquil beach somewhere sipping pineapple juice. It was the vivid visions of having to donate skin to replace the skin he would lose if he came off that made it very hard to get the denial thing to work properly. Relax Grams, Tersh was about 2 paces behind me ready to jump to the rescue if need be. It was then, I realised just how brave Max is..........definitely T's genes in there {here is an example of ones of Maxi's Dad's experiments. Tersh stood on the roof of his car, on top of his surf board, holding the leash, while the car was being driven by one of his friends, with the lights off.........oh did I forget to mention, it was @ 8pm @ night, on a road with no street lamps.} need I say more????

I would have gotten a photograph of Max in action but the camera battery died~thankfully!. All I managed was these serene photographs of Maxi exploring one of the safe ramps when we first got there, this was before the "Super Cool Ramp" was discovered. 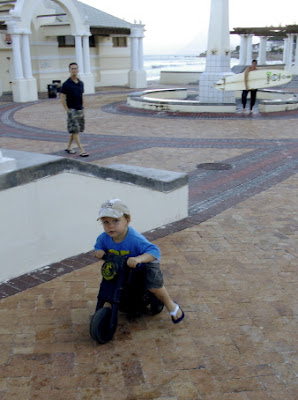 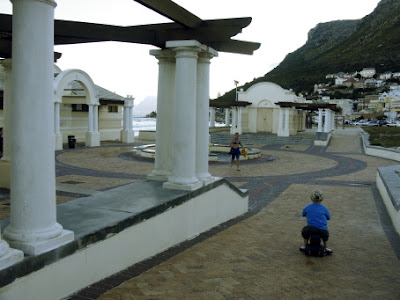 What I did do was ask Max how he felt racing down the high ramp.
The conversation went something like this:

Me: Maxi how does it feel to race so fast down the ramp?
Max: It was SO fast, mama!!!
Me: Really Poeks??
Max: Yes, it was like the dogs were running after me!!
Mama: Wow! that must have been scary????
Max: You are right about that {I must say this often haha!}, it was sooooooo scary BUT SO COOL mama!
Mama: Goodness babes, that's amazing!!
Max: It was like cars & bugs & stuff!!! {I dunno, maybe these are things that he associates with scary}, WATCH ME DO IT AGAIN!!!
Mama: {under the breath.....} Freak, not again!
Max: Wheeeeeeeeee!!

So yet another lesson in restraint.....for me. It is so easy to get over cautious & try and protect our kids from all the stuff that could be potentially harmful. In a lucid moment free from the maternal hormone that rages through my veins, especially when I watch Max doing typical boy stuff, that teeters on the edge of life threatening {in my opinion anyway}. I do know & realise that it is a vital part of life. That it is these experiences that will in some way determine his loves & passions, they will help him discover who he is & help him be comfy in his own skin but most of all help him learn the defining skills that will teach him the necessity of judgment.
My biggest lesson is something I will have to practice over & over, to step back and allow him to just be.

It is flippin' hard I must say!!!! but I take one day at a time & PRAY for strength to do this right.