Stories from the bowl...

OK...so I think I am very smart...I am posting this blog post from my new downloaded add-on for Firefox...called Scribefire. You can post from anywhere on the net using this preloaded widget...it is so cool & far more versatile than bloggers publisher.
Now let's hope it actually works~ hahaha!
I wanted to share with you x2 recent incidences I experienced with Maxi, that had me in stitches.

For all of you who don't know him...he is an outgoing, confident little act at the best of times & so when I heard him roaring at the top of his lungs from my bedroom...I knew it was probably going to be a Kodak moment. Armed with suitable equipment I went to investigate, I must say I knew he was good at imaginary games but this was the first time I'd ever seen him improvise just so well.... 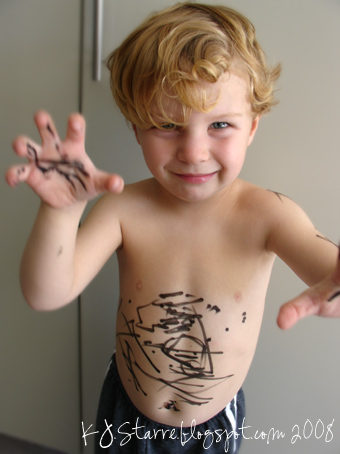 He had taken a large black board marker & covered himself in hair....note how even his belly button was all coloured in. He roared at me in monster language until I asked him to translate into English...where I was told he was a 'rock throwing monster from Mars'...so there you have it; an actor in the making...Lord help the Mama :o)
Below is a pic of the Mars monster mid roar. 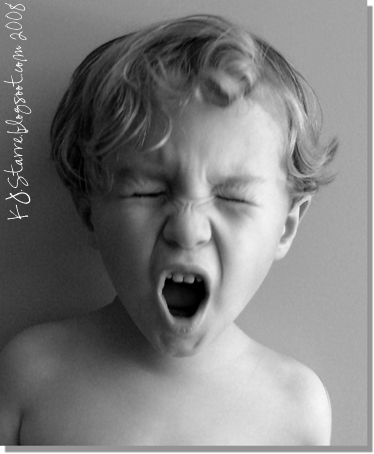 The next incident was on Sunday while I was blogging & he was playing...I heard him 'drumming' as he usually does on anything near enough to be transformed into a drum kit; only this time it was the sooty fire grate. After the 'song' was finished, the responsible parent in me demanded he wash his filthy hands. I finished up what I was doing & headed to the bathroom to help him, where I was told he had already done it all by himself. I looked around & saw the basin was spotless...whipping around I asked where he had washed.....it didn't take much CSI to work it out...

He proudly explained: " I used the water in toilet bowl to wash my hands Mama...& I also washed my hair in there look!!" True as bob...his head was wet too.....the 'ICK' factor for me was completely overwhelming, hence I ran a bath immediately & tossed him into it. 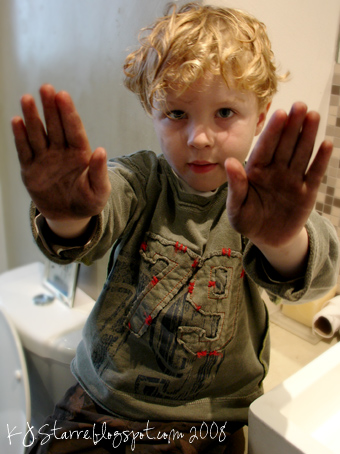